I’ve always wanted to rescue an animal – to make a difference in some innocent baby’s life …. I’ve held my breath  through the stories of people climbing down cliffs to rescue stranded puppies, firemen carrying family pets out of burning buildings, brave souls crawling out on icy lakes to break stranded animals out with their bare hands, the fleet-of-foot dodging traffic on speeding highways to reach scared creatures on the median.   My life has been so changed by the loving pets that have owned me, that I wanted to pay this forward and change the future for another.

The reality is that I don’t climb cliffs, I dislike the cold too much to be near an icy lake, and I work five minutes from home – all on side streets.  As for firemen , there is a level of courage in that career which defies all description.  It seems I am pre-ordained to a life of “ordinary”.

The other reality would be that I have five cats, as previously mentioned.  And it’s not that I don’t have room in my heart for many more…. it’s the other places that I am full up – like my home, my bank account, my lap…..

Let’s rewind this picture to this past April – a Sunday specifically.  My daughters and I arrived for a late lunch at a local restaurant – one of those train station restaurants…. right by the tracks and partially composed of old train cars.  Can you see it in your mind?  Good.

As I was trailing them up the outer stairs, one of my daughters said “Oh look!  A kitten!” I turned my head and made eye contact with a little white cat… filthy, laying in a patch of sun right next to the train car, and meowing at me.  Direct eye contact, mind you.   None of that side-eye stuff.

I couldn’t get her out of my mind all through lunch.  The food was hard to swallow and turned to lead in my stomach.  I kept picturing her out there… a couple of feet from the tracks….inches from the parking lot… ugh.

Finally I spoke to God. “God”, I said, ” if that kitten is still out there when we leave, I’m going to do something about it.  I’ll leave it in Your hands.”   (I didn’t hear the thunder clap, or witness the bolt of lightning, but after uttering those words I know that they happened.)

I didn’t spot her at first as we exited the building…. but then there she was.. relocated slightly under a bush, but still meowing plaintively at me. Apparently God’s decision had been made. I dropped to my knees, put out my hand, and made that all-encompassing ‘psspssspss’ noise at her to which all cats through the ages have responded.  She trotted right over and  I was permitted to pick her up and wrap her in my jacket for the car ride to the SPCA – which was closing in 25 minutes.  God definitely had a plan for this one.  She made herself at home in the car – exploring the back seat before settling down companionably in my daughter’s lap for a snooze.

We arrived minutes before they closed and left her in good hands, on the proviso that as long as she wasn’t Feline Leukemia positive (because of the five at home), I wanted to adopt her.  She had been placed in my path for a reason.  Evidently five cats was not enough and there was still room at the inn…. 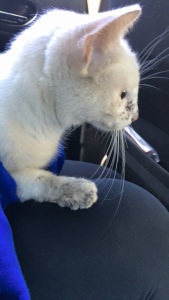 Here we are seven months later.  Elsa is a beautiful girl.  Not a kitten at all when we found her, but at least a year old.  Who knows how long she had been on the street – long enough to be hit by a car at some point because both her upper and lower jaws were broken on one side and a bone was protruding through her chin.  Considering the amount of pain she must have been in, it’s a testament to her trust in us that she allowed us to help her.

No one had looked for her.  She had not been microchipped.  Yet

this beautiful, pure white cat was not feral at all.  Clearly she had had a home at some point.  How sad. 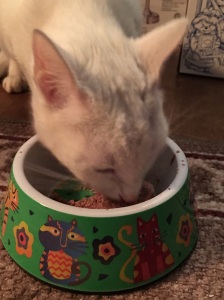 It took a while for Elsa to get used to the other cats…. and the dogs.   She accepted my senior

Golden first…. naturally since he is the most gentle and he took the time to approach her slowly and sleep outside her cage at night until she trusted him.

Eventually she stopped ducking below the window sill

whenever a car drove by outside our home.  She no longer panics about meals, although she still likes to eat a little removed from the rest of the hoards.

Elsa likes to play with her sisters and brothers now… she loves toys, and she loves warmth.  I like to think that she has forgotten the horrible time she had – she sleeps very peacefully so I trust her dreams are happy ones.

I’ve only been back to that restaurant once since… and my eyes definitely strayed toward the train car…. but no one was there.  I guess six cats is enough for now.

Changing the life of an innocent creature is a wonderful experience, and Rescue comes in many shapes and sizes – and sometimes takes the form of a little white cat….. 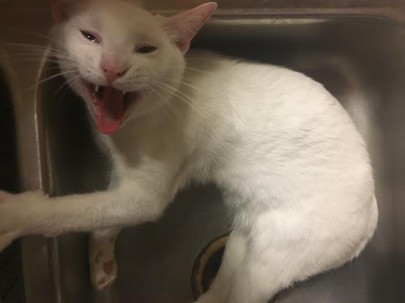